The teachers role would be to lay down 'lessons' or lesson card of various difficulties. This would form a linear board for the student.
The teacher would win if he was out of lessons.
The students role was to catch up entirely with the lessons. The student has mark cards, and if the total would sum up to enough to take the next lesson, he could advance. By advancing, the student has to hand in a mark of the difficulty of the lesson card.
To obstruct the teacher from laying down to many cards, the student could request a teacher evaluation. If the teacher has put down the lessons in such a way that it obstructs the player too much, then the teacher would get a handicap.
However, the problem with this iteration was that the teacher would always win, and also, it was not interesting to play. The choices that were made were pretty much obvious and did not matter. 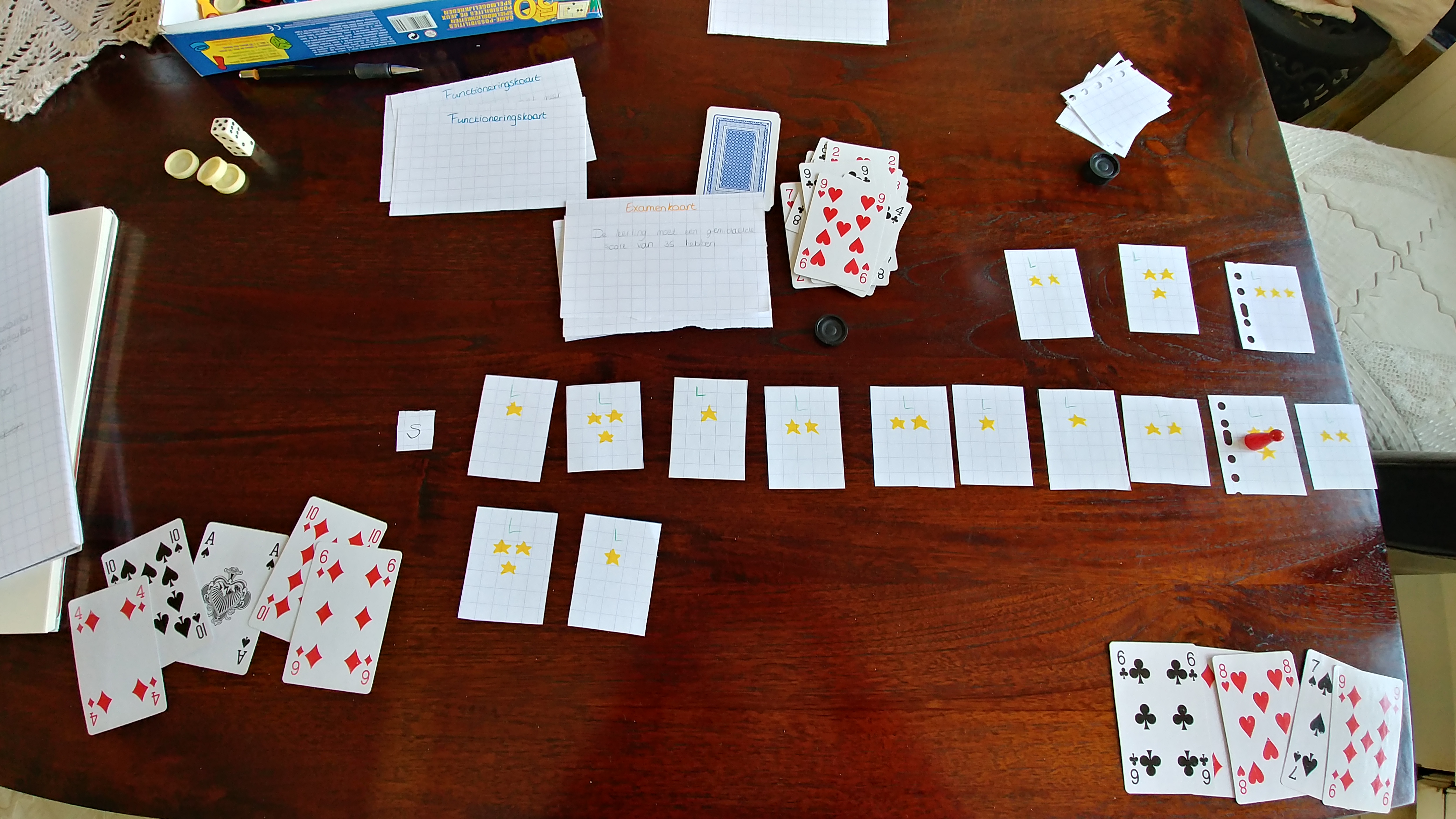 I started over and new from the beginning that I probably would have to dispose of the teacher role. Since I still wanted this game to be about a 'Student's Battle' I decided to add in another common problem: balancing energy and getting your marks.
I also wanted the board to stay fluid.
I came up with the next pieces that made up the board: 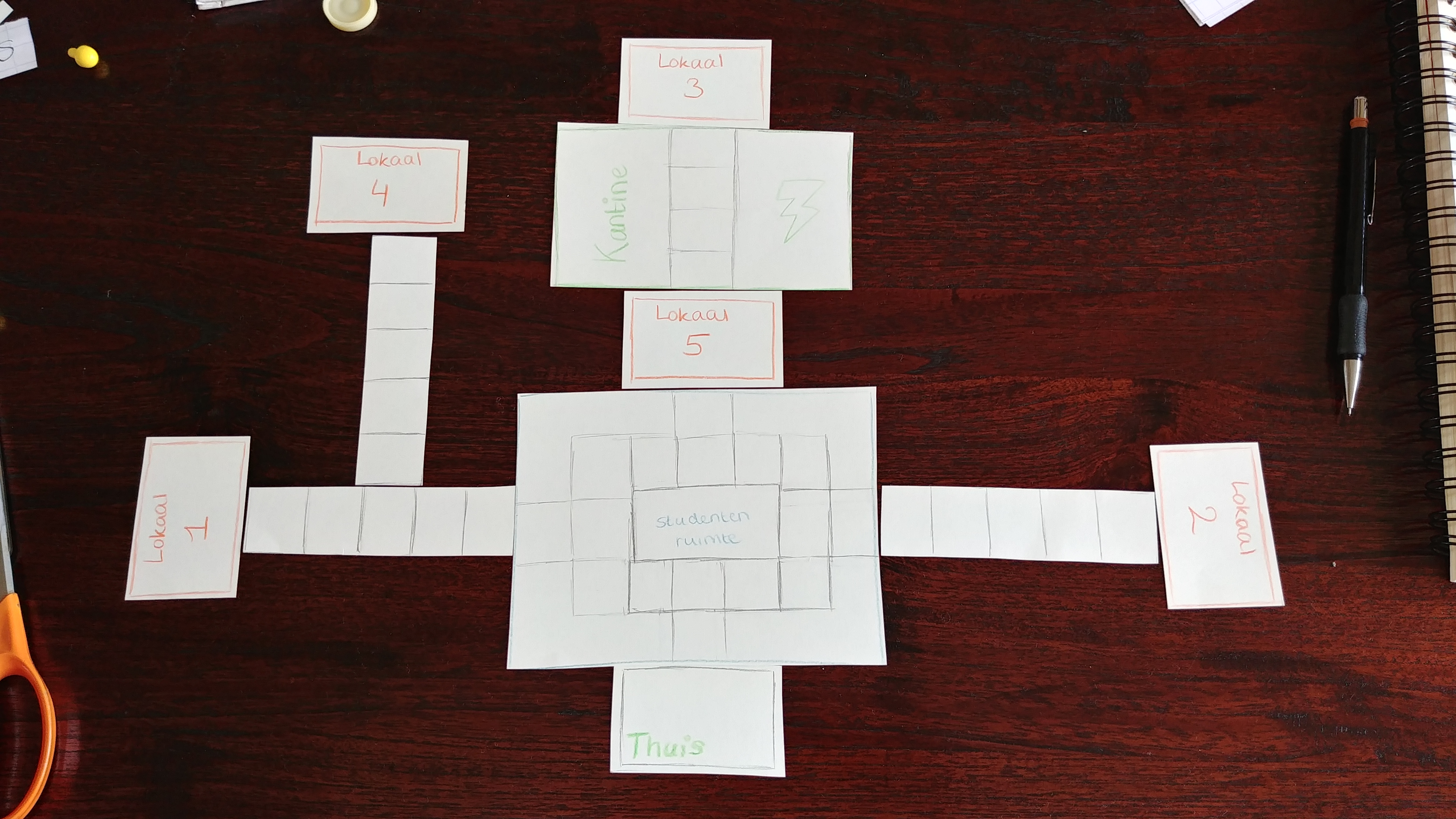 The players, both students, would go to the classes and spend their energy (a limited pool of 20 pieces) to get their marks.
Going to a class would get them a mark of their choice:
Low mark (1 star) would cost a little energy
High mark (3 stars) would cost them more.
Also, every turn they could move (1 energy cost) or skip the turn (retrieve 1 energy).
- Home would retrieve all energy
- skipping a turn in the cafeteria would return 2 energy.
- You cannot rest in the classroom.
- Accidentally running out of energy would mean your loss.

I was stuck on this for a while, because the 'get the most and highest marks' win was too long and pointless.
Then I decided to add 'exams'. Every classroom would have one exam per player. Getting the exam would give you a low mark card.
You need to get all the exams, and go back to home. The first person to do this would win. However, in the study room, you could upgrade your marks. So if you ended up in a situation where the other one got the marks faster and was heading to home, you could upgrade your marks to delay them.

I though this iteration was getting to be quite fun already, however it took very long and one turn was only one step for the player. 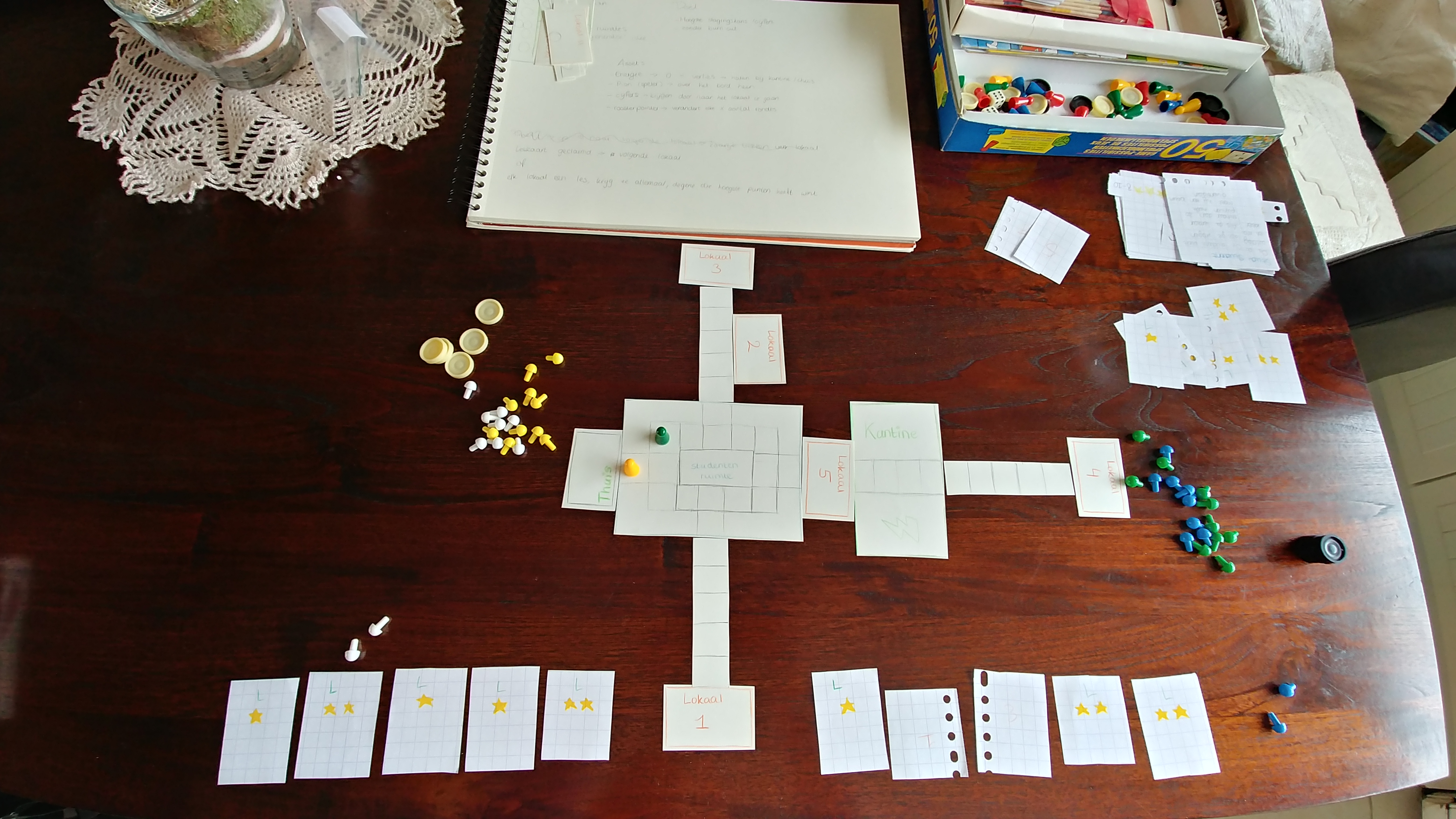 So, I arrived at my last concept; the final one.
You can see the explanation in the video!
From there on out, the only big problem was some balancing issues around how much energy cards would cost and when events and the "Stupid Student" cards should occur.

I am very happy with what this game has become!